Your web browser will send what is known as a “User Agent” for every page you access. This is a string to tell the server what kind of device you are accessing the page with. Here are some common User Agent strings:

You can find your own current User Agent here.

Some webpages will use the User Agent to display content that is customized to your particular browser. For example if your User Agent indicates you are using an old browser then the website may return the plain HTML version without any AJAX features, which may be easier to scrape.

Some websites will automatically block certain User Agents, for example if your User Agent indicates you are accessing their server with a script rather than a regular web browser.

Fortunately it is easy to set your User Agent to whatever you like:

Using the default User Agent for your scraper is a common reason to be blocked, so don’t forget.

Sometimes a website will have multiple versions: one for regular users with a modern browser, a HTML version for browsers that don’t support JavaScript, and a simplified version for mobile users.

For example Gmail has:

All three of these interfaces will display the content of your emails but use different layouts and features. The main entrance at gmail.com is well known for its use of AJAX to load content dynamically without refreshing the page. This leads to a better user experience but makes web automation or scraping harder.

On the other hand the static HTML interface has fewer features and is less efficient for users, but much easier to automate or scrape because all the content is available when the page loads.

So before scraping a website check for its HTML or mobile version, which when exist should be easier to scrape.

To find the HTML version try disabling JavaScript in your browser and see what happens.
To find the mobile version try adding the “m” subdomain (domain.com -> m.domain.com) or using a mobile user-agent.

Google has released a tool called Swiffy for parsing Flash files into HTML5. This is relevant to web scraping because content embedded in Flash is a pain to extract, as I wrote about earlier.

I tried some test files and found the results no more useful for parsing text content than the output produced by swf2html (Linux version). Some neat example conversions are available here. Currently Swiffy supports ActionScript 2.0 and works best with Flash 5, which was released back in 2000 so there is still a lot of work to do.

Most of the discussion about Google App Engine seems to focus on how it allows you to scale your app, however I find it most useful for small client apps where we want a reliable platform while avoiding any ongoing hosting fee. For large apps paying for hosting would not be a problem.

These are some of the downsides I have found using Google App Engine:

Despite these problems I still find Google App Engine a fantastic platform and a pleasure to develop on. 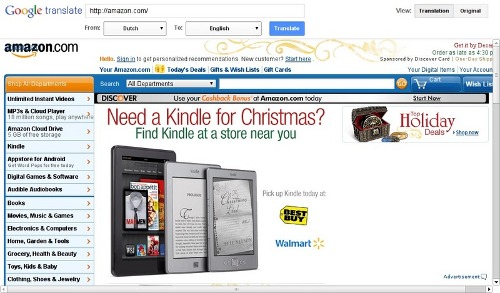 Occasionally I come across a website that blocks your IP after only a few requests. If the website contains a lot of data then downloading it quickly would take an expensive amount of proxies.

Fortunately there is an alternative - Google.

If a website doesn’t exist in Google’s search results then for most people it doesn’t exist at all. Websites want visitors so will usually be happy for Google to crawl their content. This meansGoogle has likely already downloaded all the web pages we want. And after downloading Google makes much of the content available through their cache. 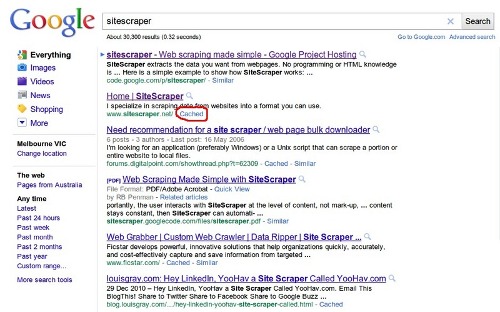 So instead of downloading a URL we want directly we can download it indirectly via http://www.google.com/search?&q=cache%3Ahttp%3A//webscraping.com. Then the source website can not block you and does not even know you are crawling their content.